Attendees were greeted bright and early by the brassy tones of the Florida Street Blowhards, who later played each of the official songs/marches for each branch of service, as veterans stood and received special recognition. In attendance was Retired MS Fred Dixon, U.S. Army Korean War and World War II Veteran, who is also the oldest living veteran in Louisiana and is a Zachary resident.

Mayor Amrhein gave a moving speech, recognizing each of his city employees individually for their unique talents and their dedication to the city, as well as his family for their support over their past 12 years in office. “Thank you for the 12 years,” he said. “I hope we left it better than we found it.” He also recognized Zachary City Court Judge Lonny Myles, who will be retiring this year after 28 years, as well as Parks and Recreation Director Shane Hebert, who will also be retiring at the end of this year.

Next up, Congressman Garret Graves addressed the attendees, asking, “What would you be willing to put your life on the line for?” He reminded the audience of the sacrifice and bravery of those who fought for our freedom in the American Revolution. Our Veterans and their dependents, he said, do it for all of us–for complete strangers. “Are we properly respecting that sacrifice?” he asked, urging everyone to focus on roadways, flood protection, schools, priority spending on tax dollars–the things most of us agree on, instead of waste time arguing about the things we don’t agree on. “Use our freedom in a way that’s respectful to our Veterans,” he urged.

Finally, Reverend Dr. Derrick Williams of New Pilgrim Baptist Church closed out the two-hour ceremony with a beautiful prayer of blessing upon our community and its leaders. 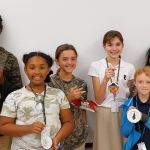