Let’s hope he’s better at eating pancakes than he is at picking a winning lineup.

Yep, it’s that time of year again: the end of the Fantasy Football season. For many leagues, with last place comes some pretty nasty consequences. Why is this? Unfortunately, fantasy leagues have recognized that when participants start to lose the season, there is not much incentive to give the league proper attention. This results in empty player slots, playing injured or OUT players, and the net result is a sub-par experience for everyone else.

Mayronne’s particular draft rules outline a punishment where the loser of the fantasy draft must sit at an IHOP for 24 hours. The sentence may be commuted by one hour per pancake eaten. Mayronne, team name The Pancake Avoiders, ended the season 3-12-0 W-L-T in a 12 player league. Some notable picks on his team were Jared Goff QB, Najee Harris RB, Ceedee Lamb WR, Denver D, and Jason Myers K.

However, the rules do allow for one pretty giving loophole: the loser can have help with the pancakes from other players in the league. And that’s how the local man beat the system using *one weird trick!*

Joined by his wife and two young sons, and another league participant that goes by “Americana is Mahomes” with his wife and two sons, Mayronne set out to eat 24 pancakes as quickly as possible. The issue, however, proved to be actually *receiving the food.*

-The wait at the front door was one hour, resulting in a 23 pancake punishment remaining.

-The table orders 23 pancakes. The waiter thanks us for “just ordering pancakes.” Other tables are receiving salmon and broccoli, linguini, turkey with rice and gravy, something that was either spaghetti and meatballs or some form of buffaloed something, and other unexpected items on the International House of Pancakes menu. Pancakes arrive in 30 minutes (22 pancakes owed).

Mayronne, with a full lumberjack beard, sets out on a mission to tear up some flap-jacks. He has fasted all day. One problem–there is no water, no syrup, no napkins. Out of earshot, the waiter’s bald head is covered in sweat as he is working as the one man kitchen crew. Mayronne and guests tear into the stack DRY.

Mayronne’s wife Lanie was able to grab another plate and one syrup from another table whose diners had vacated, but whose mess remained. Mayronne eats a 12-stack without so much as a grimace on his face. The waiter arrives with three chocolate milks and STILL NO WATER (!), and each family, fighting for resources, splits the drinks hobo-style (sipping from the same cup). The waiter, finally arriving with water, sees nothing but clean plates and guests trying to hold onto sanity, wriggling babies in their arms. They would have willingly doubled their order if it meant getting to leave the IHOP before bedtime.

It’s fair to say that the biggest punishment was going to an understaffed IHOP with three babies, and the real MVP was the host/bus-boy/waiter/pancake chef, who did it all with a smile on his face. 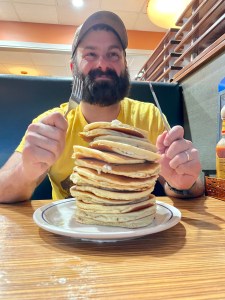 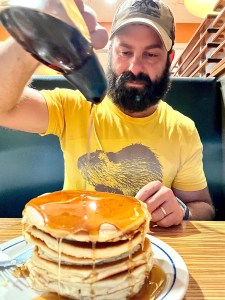 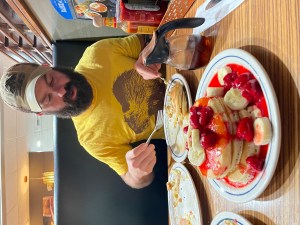 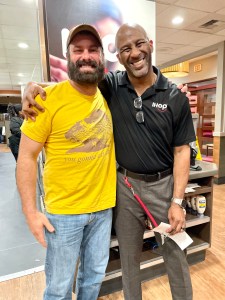 Got another local interest story idea? Want to tell us your biggest punishment to date? Drop us a line below!