Litter in Zachary: It’s Not Worth It

The City of Zachary removed a heap of trash from one side of the road on Hwy. 19 from Sunset to Port Hudson Pride Road and has issued a reminder that littering is an unlawful act that can carry a fine of up to $1,000.

Litter is more than an aesthetic issue. Trash along roadways can affect local businesses, homeowners and the overall perception of a city.

The presence of litter in a community decreases property values by a little over 7%, according to the National Association of Home Builders pricing model. Litter is also bad for business, costing American business owners $9.1 billion in clean-up costs each year, according to Keep America Beautiful. In a study, 36% of business development officials said that litter impacts their decision to locate to a community.

Criminologists also see the impact that littered roadways have on a city. In criminology, the broken windows theory states that visible signs of crime, anti-social behavior and civil disorder create an urban environment that encourages further crime and disorder, including serious crimes. 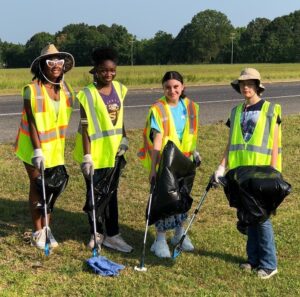 Earlier this year. the City of Zachary launched an Anti-Litter Campaign to combat the city-wide problem.

“Litter endangers our environment, our wildlife, and our economy,” a post by the City of Zachary reads. “It pollutes our neighborhoods and decreases property values”

After teaming up with community workmates at Dixon Correctional Institute, hundreds of bags of trash were collected along main corridors over the summer. The City has also teamed up with the Zcahary High School Beta Club to continue their litter campaign initiative by inviting community members to participate on the fourth Saturday of each month. If you are interested in joining this coalition, contact the ZHS Beta Club at zhsbeta@gmail.com.

Reducing litter and keeping our city beautiful is up to you. Do not throw trash out of your window, keep your yard free of debris and remove or properly restrain items in truck beds that may become litter.

Motorists and pedestrians contribute a combined nearly 70% of litter over 4 inches, according to Keep America Beautiful.

“We encourage citizens to take responsibility and try their best to dispose of trash properly,” continued the post by the City of Zachary. “Take your food wrappings, drink containers, newspapers, and other litter home with you and dispose of it in your trash or recycling bins. Do not throw trash out of your window! Keep a litter bag in your car.”