‘At the Camp’ Defined for Texpats

I’ve tried to warn my fellow Texpats that they will have to learn the lingo now that they live in Louisiana. Here’s a new one: “If you need me, I’ll be at the camp!”

You see, most Texans I know enjoy camping. They will drive all day looking for that perfect place to pitch a tent or park the camper for a night or two. But here in Louisiana, “going to the camp” is something quite different from “going camping.”

When Louisianans say they are “going to the camp,” they don’t mean they’re headed to some public campground along the Interstate. It’s much more special than that.

I called a few folks back in Texas to check my assumption that Texans have no idea what their  Louisiana neighbors mean by “going to the camp.” I was right – not one of them had a clue what I meant.

I turned to my neighbor, who has been going to the camp with his family since he was too young to remember. He explained that a camp can be anything from a tiny, primitive structure to a fine, well-appointed house, with all the luxuries of home. “Most camps,” he told me, “fall somewhere in between.” 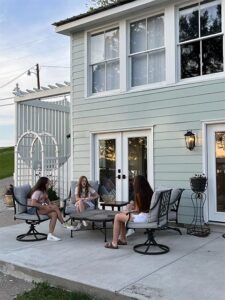 Most camps have one thing in common- they are tucked away somewhere secluded. It is especially cool if they are located near a pond, river or creek, but they don’t have to check that box to qualify. The only requirement for a camp is it has to be surrounded by the natural beauty found in south Louisiana. Camps are used for hunting or fishing, but the lure of being close to Mother Nature is the main draw.

In our part of the state, some camps are located just across the state line in Mississippi. No matter the location, a camp is that perfect spot to get away.

Louisiana camps can take the form of a traditional home, a mobile home, a travel trailer or even a houseboat. They may be down the road or a couple of hours away. When Louisianans say they are “going to the camp,” they don’t mean they’re headed to some public campground along the Interstate. It’s much more special than that.